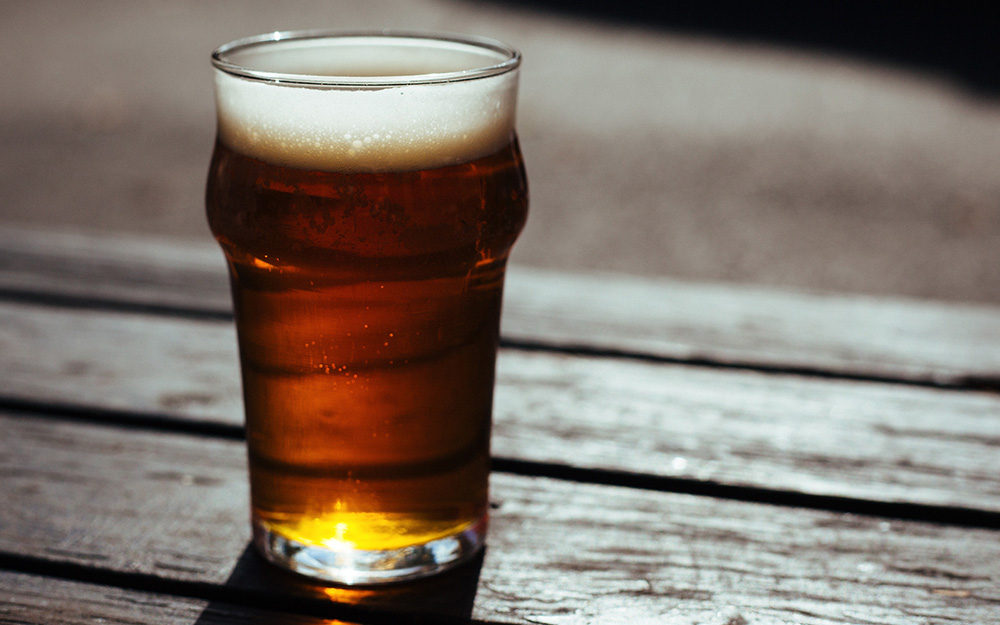 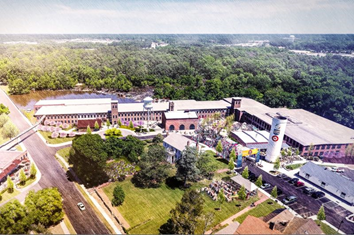 A rendering of the repurposed Rocky Mount mill.

Usually, our travel-related features focus on nearby destinations with an eye toward events, activities, entertainment and, of course, food and drink.

This edition takes a slightly different twist as we combine the recreational attributes of our featured locale with a subject critical to northeastern North Carolina — jobs and the revitalization of cities.

Before the Age of Globalization, regional cities such as Rocky Mount, Washington, Greenville, Kinston and even Elizabeth City had thriving agricultural and manufacturing economies.

Tobacco, cotton and peanuts led the way in rural agriculture, but the cities were also home to manufacturers who supplied Detroit with fan belts, tires and other parts. Textiles, chemicals, paper products were also part of the economic landscape.

As those jobs migrated to other countries, the region’s cities went into decline. Even agriculture has suffered as North Carolina farms find it difficult to compete with larger, corporate-owned operations that dominate production nationally.

In the 21st century, we find our towns experimenting in numerous ways to revitalize their communities with new industries, ranging from tourism to pharmaceuticals.

And in one part of Rocky Mount, a business incubator focused on one of America’s fastest-growing economic sectors — craft beer. 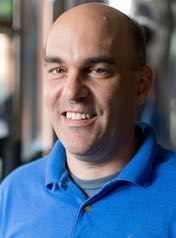 Many people would be envious of Sebastian Wolfrum’s job. Born and raised in Germany, Wolfrum earned certifications as a brewer and maltster before arriving in the United States in 2005 to become director of a large North Carolina brewery.

He is now the executive brewmaster for Rocky Mount Mills, working under the auspices of Raleigh-based Capitol Broadcasting, owners of WRAL-TV in Raleigh, which bought the now 200-year-old cotton mill in 2007.

Capitol’s CEO Jim Goodmon and his son, Michael, visited the site at the request of Rocky Mount officials, who were afraid the old mill, which churned out Confederate Army uniforms in the Civil War, would be sold and torn down.

The Goodmon family has been instrumental in the revitalization of downtown Durham, and Michael Goodmon has been overseeing success stories there, such as the American Tobacco Campus and American Tobacco Underground, where restaurants, start-up business ventures and housing have created a thriving community.

Capitol’s vision for Rocky Mount is similar to what has happened in Durham.

When completed, Rocky Mount Mills will have 300,000 square feet of office space and apartment lofts inside the old mill.

In the adjoining neighborhood, the small houses once occupied by mill workers have been renovated and are being sold as primary residences or held as rentals for craft beer tourists, whom officials hope will flock to the incubator.

The company is also building 42 new houses within walking distance of the campus that will also be targeted to the tourism market.

Wolfram already owned a consulting and malting business that works with craft brewers, as well as the Bull Durham microbrewery, which operates a small microbrewery at the Durham Bulls minor league baseball stadium and is owned by a subsidiary of Capitol, and also brews beer at the Rocky Mount incubator.

Wolfram reminded us that “craft beer has had a history revitalizing communities” as it engages the surrounding neighborhood as well as attracting events and tourists. Craft beer tourism is experiencing exponential growth and is already a major attraction in Asheville and other parts of North Carolina. 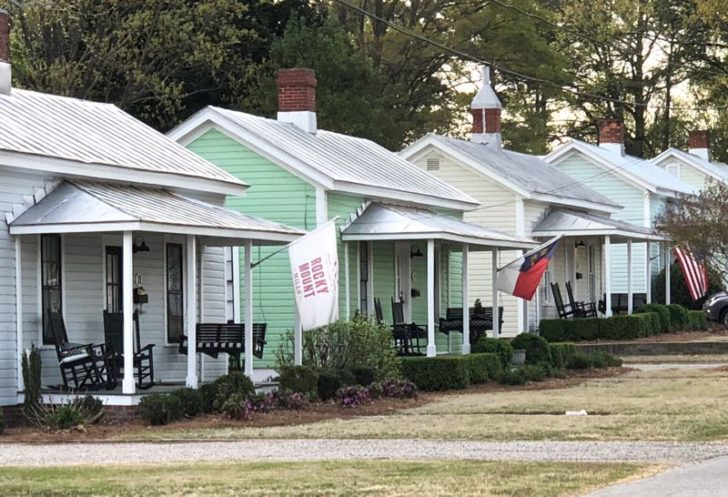 Small houses once occupied by mill workers have been renovated for sales and rentals.

The incubator is housed in an outbuilding on the Rocky Mount Mills property and currently houses three start-up businesses, two craft beer manufacturers and one maker of non-alcoholic elixirs — the latter being owned and operated by Scott Meyer, a name well known to Outer Banks beer enthusiasts as the first brewmaster at the Outer Banks Brewing Station.

Capitol has supplied each brewer with about $250,000 in brewing equipment, far more than would be needed for a craft beer startup operation. Wolfram said that’s so the three brewers have the capacity to ramp up production to a point that after three to five years, they have sufficient sales to move out on their own.

Rent is extremely reasonable, according to Meyer, and there is also a “per barrel” production charge paid to the subsidiary Capitol set up to operate the incubator.

The incubator also partners with Nash Community college, where the owners and employees of the new venture use the college’s resources while earning an academic degree in Brewing, Distillation and Fermentation.

Additionally, Wolfram is a daily presence and holds his own classes as well as day-to-day mentoring on everything from brewing to canning/bottling, sales and marketing strategies.

And, “they are already working with and learning from each other,” Wolfram offered.

Given Wolfram’s real-life experience in craft brewing, the marriage of academics with personal mentoring from an expert gives the incubator occupants a significant leg-up over other craft beer startups.

As a new experiment, Wolfram was excited about his tenants. If they do well, he thinks the three-year arc he has in mind is achievable for each brewer. 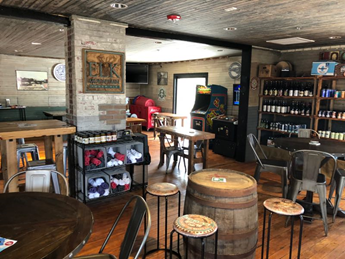 “By then they should have their brand and product tweaked,” Wolfram said. “They will have established sales on a scale suitable to take their track record of managing brand, production, quality and revenues to banks and investors and take the next step.”

Of course, he has no idea how many of his first crop of tenants will succeed, or if he may have to nurture them longer than five years.

“It’s more of a work in progress, so we’ll be making adjustments along the way, I’m sure,” he said.

When asked if the incubator would over-saturate the market if they keep churning out three more craft brewers every three-year cycle, he told us that wasn’t a worry.

“We expect some of them to remain in Rocky Mount, but we expect others will migrate to Raleigh, Durham, Wilson, smaller towns nearby and we also expect they will fill different niches,” Wolfram said.

“Some might open taprooms, others might focus on supplying kegs to bars, still others widespread distribution of cans and bottles,” according to Wolfram.

The small operation has already attracted residents, locals and other businesses to the area.

Tarboro Brewing, based in the namesake town that once served as a major hub and employer for Carolina Telephone workers, has opened Tarboro Brewing West at the Rocky Mount Mills, where patrons can sample their beer and choose from a wide-ranging array of tacos in a brewpub environment.

The Goat Island Bottle Shop sells wine and beer in bottles, growlers and on draft.

The complex also features outdoor entertainment during the warmer months.

The April weekend we visited saw a large crowd turn out for a concert from the well-known North Carolina band Nantucket. Not only were the Mills’ restaurants doing a brisk business, several food trucks were also present and the long lines confirmed there was plenty of business to go around for everyone. 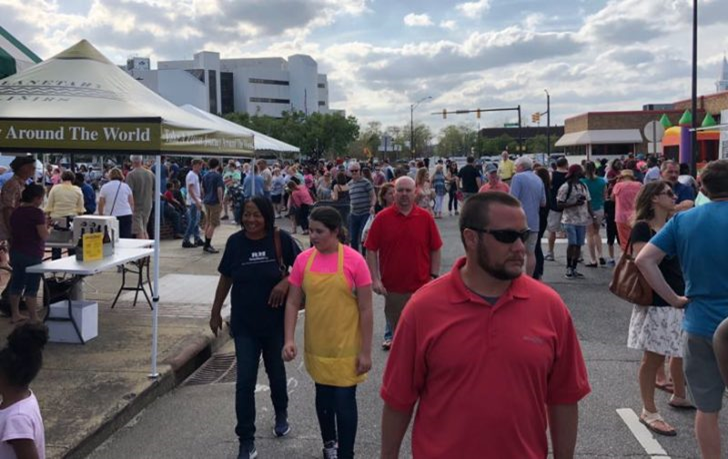 The new breweries help Station Square and other downtown merchants put on festivals and are helping to revitalize downtown. 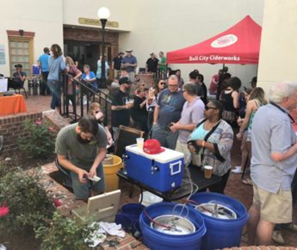 The next day all of the incubators joined Tarboro Brewing and even more food trucks for a downtown festival hosted by Station Square, which has developed retail office space in downtown Rocky Mount.

Smaller businesses can lease dedicated desk space and conference rooms are available and “perfect for business meetings” and similar gatherings.

The event we attended featured live bands and DJs in addition to the food trucks and craft brewers, and a diverse crowd filled the streets.

Craig sees a natural connection between the incubator and downtown. She envisions corporate events where they utilize Station Square for retreats and planning session by day, while housing employees in Rocky Mount Mills housing at night where they can dine and savor the craft beers.

The office space and weekend events, including the popular food truck rodeos, are already attracting residents and she pointed to a nearby currently unoccupied building, which she said would soon be renovated with retail businesses at ground level and apartments or condos above.

To read the full article from The Outer Banks Voice, please click here.

NUTKAO’S TASTE FOR QUALITY MAKES NASH COUNTY A WINNING DESTINATION
By Lawrence Bivins Italy’s love affair with sweet treats began 800 years ago when Venetian merchan...
Manufacturing is thriving in these 5 US cities
By Megan Henney FOXBusiness The U.S. manufacturing sector may have recently contracted to its low...
TWIN COUNTIES RECOGNIZED IN BUSINESS NORTH CAROLINA
We are very excited for the Twin Counties to be recognized in the latest edition of the Business Nor...