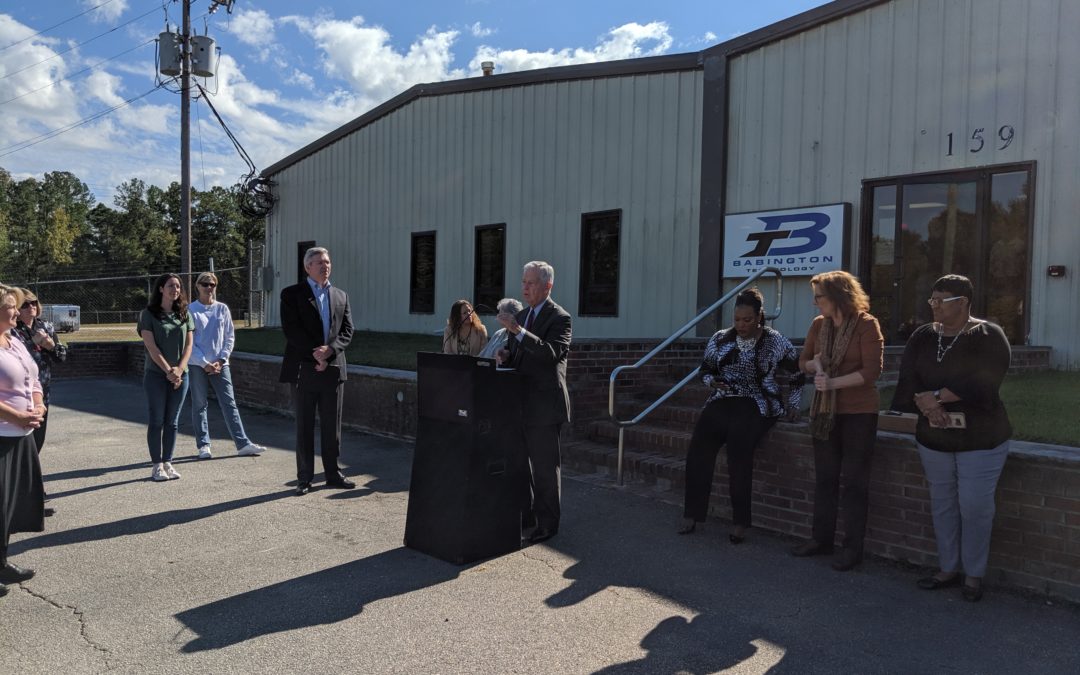 “Most people have no idea as to who Babington Technologies is,” Carolinas Gateway Partnership President and CEO Norris Tolson said.

Indeed, located at a dead-end street between U.S. 301 and the CSX railroad tracks heading toward N.C. Wesleyan College, Babington may be one of the region’s least-known businesses.

Babington relocated to Rocky Mount from McLean, Va., in the early 1990s. The company is known for the Babington Airtronic Burner, which uses the unique and innovative liquid atomization principle invented and patented by Robert S. Babington, the company’s founder and CEO, to create fire.

These days, while Babington is “reinventing fire,” as President Andy Babington describes a retuning of the closed combustion technology device, they also are serving the military as well as people in need through their mobile kitchens.

The company is a small business defense contractor of mission-critical field kitchens as well as disaster relief field kitchens — all because of the closed combustion technology invented by the company’s founder. The company also manufactures commercial food service equipment for companies such as Chipotle Mexican Grill.

“We make appliances with special burners to heat and feed American troops around the world as well as for humanitarian purposes, such as the Red Cross,” Andy Babington said.

Babington has been awarded a new Department of Defense contract and is in the process of expanding and investing about $1.5 million and adding 20 jobs.

The company opened its operations to a tour of about 20 community and government leaders on Thursday with Babington giving demonstrations of the technology, which sounds much like jet turbines when afire.

“That’s one thing we’re changing when we ‘reinvent,’” Babington said. “It will be much quieter.”

The closed combustion technology devices generate a flame at 2,100 degrees with an exhaust housing that remains cool to the touch.

Babington recently has been awarded a $200,000 building reuse grant for its facility, the former FabX Metals building.

Babington said the grant, through the state Department of Commerce and the City of Rocky Mount, will be used to make roof repairs and shore up a floor so an additional brake press can be added.

He said portions of the facility also will be sectioned off to protect computer-driven cutting machines and other equipment.

Babington’s kitchens are utilized by the military, but Babington said he gets a real feel of helping someone when his company can send an emergency kitchen to a disaster area, such as the Bahamas, to offer relief.

“That’s when you feel like you’re making a difference,” he told The Telegram.