This past April, a ground-breaking ceremony was held to begin construction of the Carolina Connector intermodal rail terminal in Rocky Mount, NC. The terminal is the result of a joint effort between CSX and the North Carolina Department of Transportation (NCDOT) and is expected to go live in the fall of 2020.

It is a remarkable milestone for the logistics industry within North Carolina and the Mid-Atlantic region. It’s made even more remarkable, however, by the fact that it very nearly didn’t happen. In fact, the entire project was canceled and left for dead less than two years ago.

So, what happened to bring the project from a lost cause to ground breaking? To get the answer, we went straight to source. In this article, we interview Norris Tolson – CEO and president of the Carolinas Gateway Partnership. It is largely because of the work of Mr. Tolson, the Partnership and the NCDOT that the new terminal has a home within North Carolina. 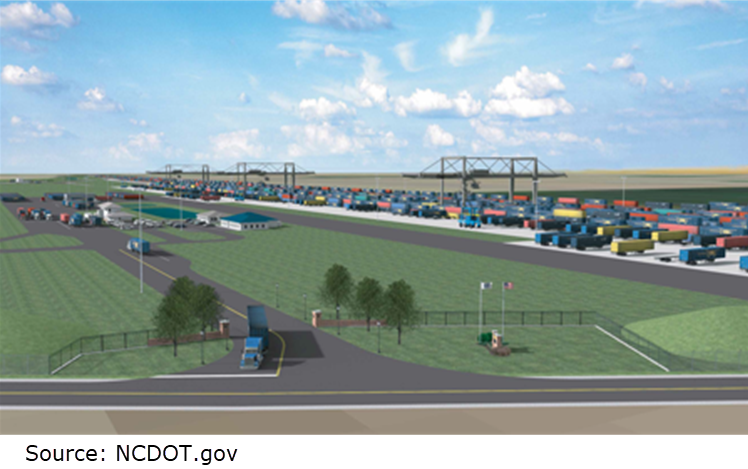 Why is the Carolina Connector significant to the logistics community, particularly in North Carolina?

In short, this intermodal terminal improves access to the marketplace. It fills a hole in the CSX railroad system – a hole the size of North Carolina. We didn’t have a terminal like this here in the state, and our intermodal capabilities were diminished because of it.

Your work with the Carolinas Gateway Partnership is a big part of the reason this terminal is now under construction. Can you tell me a bit about the Partnership?

Sure. The Carolinas Gateway Partnership is a public private nonprofit that was created about 25 years ago for the economic development of Edgecombe and Nash counties. It is fully funded by the local municipalities and about 125 private investors. We don’t get any state money.

Over about 20 years, we’ve put about two and a half billion dollars of investments into the two counties and we’ve created over 10,000 jobs. We are into a very aggressive mode right now, driven primarily by the intermodal project. Today we’re working on about 60 individual projects, which is fantastic for two rural counties.

At a high level, could you describe those projects? What kind of categories would those fit into?

We’re basically accelerating our involvement with industries that already thrive in the Eastern part of the state. This includes advanced manufacturing, food processing, logistics, agriculture, and what I’d call ‘high-tech entrepreneurial’ projects. The intermodal project is spurring a tremendous amount of interest, especially among the region’s logistics and manufacturing companies who can now add rail to their transportation mix.

Were you involved in the initial iteration of the Carolina Connector project?

I was. I’m retired from other situations in North Carolina as well as having served in the General Assembly. I arrived here to work in this partnership (January 2016) when, shortly after, the situation in Johnston county kind of went south. I reached back to my connections, both at CSX and also in the logistics world to say, “hey, maybe we ought to provide you a site, at both Edgecombe and Nash Counties,” and they said, “well, have at it,” so we reached out and put together some land.

We were fortunate to have about 9 or 10 miles of uninterrupted trackage adjacent to their double A track. It was mostly farmland and we were able to get property options for that land pretty quickly.

When the initial deal in Johnston County fell through, did most think it was dead and never coming back or did others feel that it could be revived?

No, I think people kind of felt it was lost. We did not feel that way in Edgecombe and Nash. And it turned out to be a positive thing for CSX and for us, because we really have provided them an excellent site.

Can you talk a little about the site? What makes it such an ideal location for the Carolina Connector?

It’s mostly farmland, so it’s very flat. There were very few wetland issues on the sites. We did not have to go after a hundred landowners. We only needed…I think we had 15 landowners and maybe 20 parcels.

We went out and called on these landowners ourselves. Most of these people I knew personally, or if I didn’t, my colleagues in the Partnership did. So, it was neighbor talking to neighbor, trying to get the properties in as options that would work.

What are some of the logistics-related advantages of the intermodal terminal’s location?

A big advantage of our site is that it sits halfway between Boston and Miami. It’s located just minutes from I-95 and close to I-40 and I-85. We’re also two hours from the Norfolk port, two hours from the Wilmington port, and four and a half hours from the Charleston ports. So, North Carolina rail can become a major part of the transportation mix for companies that use these major East Coast highways and seaports.

It’s also an ideal location from an overall mobility standpoint. Our site sits in a very rural, non-congested area and so we will not have the kind of issues that a more congested urban siting would’ve had. This rural aspect also makes it cost effective for manufacturers and other companies to move into the region and take advantage of it.

And, in fact, we have landed a very large Chinese tire manufacturer (Triangle Tyre) since we announced the intermodal project. It’s a very large 600-million-dollar project with 800 employees located just 8 miles away from the terminal.

How will local logistics companies like Kanban Logistics be impacted by the site?

As the terminal attracts more and more manufacturers and other companies that want to incorporate rail into their operations, they’re going to need logistics partners that can warehouse their goods and perform other services. Kanban Logistics, in particular, is in a great position to serve these companies because its Rocky Mount facility can receive rail cars right up to the warehouse or in their transload yard. The company can perform all the movements between rail and warehouse and rail to trucking that these companies will rely on.

The internodal site itself is 330 acres. Is that correct?

That’s correct. We originally planned for 710 acres of land, but they only needed 450. As they reduced the size of the project, they went from five cranes down to three cranes and reduced the land usage from 400 acres down to 330 acres. But, we – along with CSX – are able to market the remaining 400 acres of land.

So that land will be perfect for the companies you talked about at the beginning, correct?

Yes. We’ve got a couple of very interesting logistics projects that are looking at that site right now as we speak. But it’s also a prime target for advanced manufacturing and food processing because the intermodal terminal will enable them to efficiently bring in raw materials and ship out finished products.

I also understand that the terminal and its container capacity can be expanded at some point in the future.

And the only thing stopping that from happening is the volume? As soon as the volume’s there, you have the land and the resources to make it happen?

Yes, and we have this in mind from the outset so that the expansion can happen quickly once it’s time. In two to three years, we’ll be in expansion mode on that site.

Is there anything else that you’d like to add about the Carolina Connector intermodal rail terminal?

This is a North Carolina DOT facility that’s being constructed by CSX and will be operated by CSX on a long-term contract. It’s the first time CSX has done that and we’re very pleased that we’re in such a strong partnership with them.

We’re very excited. It’s a great project. It is now coming out of ground rapidly. CSX is out there right now building just as fast as they can go. The project is supposed to be completed by 2020 and so the cranes are under construction overseas. CSX is building up the site and we’ll marry the two sometime in the spring of next year.