Founded in 1978 in Beverly Hills, CA, The Cheesecake Factory has expanded to an international sensation, known for its extensive and creative menu, generous portions, distinctive décor and legendary desserts. The Cheesecake Factory currently has locations in North America, the Middle East, and Asia, and plans for further expansion in those regions, as well as North Africa, Europe, and Latin America.

The Carolinas Gateway Partnership assisted The Cheesecake Factory in finding and securing a building in the Whitaker Business and Industry Center, identifying several incentives in the process. 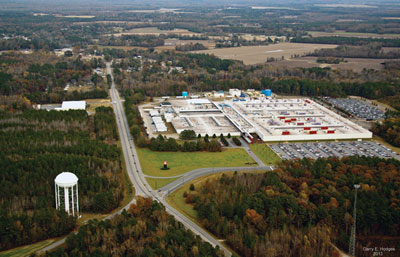 “Our business grew rapidly after going public in 1993, and by 2004, we had outgrown our capacity located in Southern California and needed to expand our manufacturing and distribution network. We studied our options for establishing an East Coast operation, including taking over an existing building and new “green field” construction. Our goal was to establish an operation that was located optimally for supply chain efficiency, was easily scalable to support our future growth plans, and where the local culture was warm and friendly. We also wanted a true partnership with the community. We found all of this with Rocky Mount, NC. Our experience has been very positive, and we have enjoyed cooperative, win-win relationships with the City of Rocky Mount, Nash County, and the State of North Carolina.”